I'll be installing the Turbo Tech Racing Lower Motor Mount once I've received it. Will make a great addition to the upper mount.

Are you running the stock lower mount right now or a different company mount?? Great to see it on there, been following this for a bit! Great job

The SXTH Element Mount which I'm going to remove and reinstall on my wifes 2020 Kia Soul GT Line. Nothing goes to waste!

Can't wait to see your comparison between the two lower mounts. Was highly considering the SXTH but went with the TT. Mine should be going on sometime this week. I'm interested to see if just doing the lower and leaving the upper stock mount in will be feasible.

Just was informed by Aaron and the guys at Turbo Tech Racing;

Customers can now order their upper engine mount for the Veloster N. Shipping will occur in the order received, and will start shipping next week. 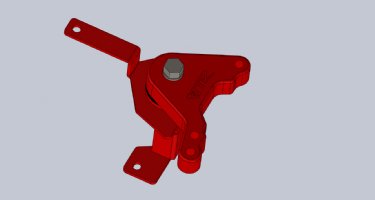 I have to thank Aaron and the whole team at Turbo Tech Racing allowing me to be part of the development and production of the TTR Upper Right Hand Motor Mount. It was an honor and pleasure working with them on the project.

This mount will fit either i30N or VN/PP or base models. It's a great compliment and upgrade to either the i30N or VN.

Keep your eyes peeled for an up and coming intake manifold in the works from; Turbo Tech Racing.
Last edited: Mar 16, 2020

No, just giving them the credit they deserve. I'm not contractually bound the anyone or anything. I help develop parts for the VN or i30N, with small performance businesses. I just enjoy helping them out.

I used to be a sponsored professional BASS Angler, so I have a knack for advertising, sponsorship and promotions.
Last edited: Mar 17, 2020
P

Will you be giving a driving review soon?
N

I'm installing the lower TTR mount this afternoon before my trip to NY. I was a little worried on the NVH from the new mount but at 75a it's not the stiffest composition out there. I hopefully will have some review to give after my 250 mile trek.

PB VN said:
Will you be giving a driving review soon?
Click to expand...

Soon as I receive and install the TTR Lower Motor Mount. No sense taking down the car until I do.
Last edited: Mar 17, 2020
N

So I got the TT lower engine mount on with my mechanic yesterday before driving from PA to NY. I noticed a slight increase in NVH at idle and then in gear from maybe 1500-2300. It's really not noticable after you get it revving. As far as power transfer, the car feels significantly more responsive and planted when getting on it. Very happy with the results and honestly I'm sure after the 2k break in on the mount there will be very minor vibrations as mentioned earlier. Let me know if anyone has any questions about the mount. Hopefully I have some insight. I tried to attach the photos I took but the file is too large.

newbtostandard said:
I tried to attach the photos I took but the file is too large.
Click to expand...

Browse to the file on your device, change size to max 1MB (no other changes necessary) and then attach to your post
N

Here is a pic of the installed mount. Thanks GazmaN!

If you want to save your photos online you can utilize imageshack.

imageshack.us
They also have resizing and photo editing capabilities.

Don't go to Photobucket they're no good and the website is down more than it's up.
T

Thanks Jeff for all your help, getting these test fit and confirmed.

You more than welcome! Waiting for more to come. Give me a holler when your ready!!

So after examining and comparing the TTR with the SXTH and Boomba lower engine mounts, I've found significance differences in design and effect. I believe I've narrowed down why the SXTH and Boomba don't eliminate wheel hop altogether and actually increase NVH.

There is literally nothing to stop the Boomba and SXTH mounts from moving up and down. They utilizes round bushings at both attachment points. Their rear brackets swivel, just as the front. So, both attachments points are free to swivel on a circular axis. This^, transmits the engine torque into up and down movement. Hence, more NVH & wheel hop IMO.

You have seen how easily the OEM upper mount flexes and moves in the photos I posted. If you don't deal with the upper mount movement, you're not going to minimize the slapping back and forth that occurs with the engine. This combined with the extra up/down movement allows the engine and suspension to bounce violently as the tires break traction, also when you shift into a higher gear.

The TTR mount doesn't swivel on the rear axis. It's mounted solidly to the rear attachment point. So It's remains static and straight. With the square and oval bushings, there is far less up/down movement. Combined with the TTR upper mount, the engine simply moves back/forward, with much less force.

So this equates into; no sharp clunking from the engine bracket, as it's grounding on the upper mount under hard acceleration. Also, no adverse up/down engine movement, which translates into wheel hop.

In my informed opinion, a great combination and worth the expense.
Last edited: Mar 24, 2020
T

Very good observation! Your design layout is exactly why we picked a square mounting bushing in the rear. It does not act as an articulating arm as you described; is also allows for a large bearing surface for bushing to aluminum contact, reducing stress on the bushing and increasing bushing life.

the oval front bushings are intentional also. They allow dampening of vibrations in the direction of the force, however are not any larger than they must be in the vertical direction, minimizing movement.

the lower mount design had a ton of R&D for our signature design.

thanks for the review Jeff!